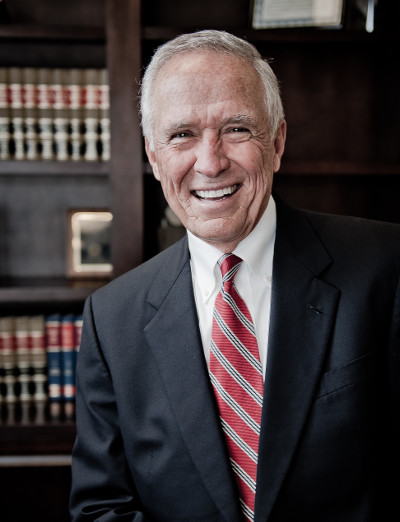 Walter Jones is one of the founding members of the firm. He began practicing with T.C. Homesley, Jr. in 1970, with the firm of Collier, Harris & Homesley, from which the existing firm evolved. Mr. Jones grew up in eastern North Carolina, earned a B.A. in English from the University of North Carolina at Chapel Hill in 1963 and graduated from the Wake Forest University School of Law in 1966. He was licensed and admitted to practice law in North Carolina and in the U.S. Court of Military Appeals in 1966. Mr. Jones served in the United States Army, where he was a member of the JAG Corps, serving at Fort Jackson, SC and in Viet Nam, from 1966 to 1970. While in the Army, he earned the Army Commendation Medal and the Bronze Star Medal.

For many years, Mr. Jones’ legal practice consisted primarily of civil and criminal litigation, during which time he was a member of the North Carolina Academy of Trial Lawyers and the Association of Trial Lawyers of America. Mr. Jones has, for the past several years, practiced primarily in the areas of estate planning and estate administration, corporate and business transactional law, commercial and residential real estate law and contract law. He is a member of the North Carolina State Bar and the Iredell County, North Carolina and American Bar Associations.

Mr. Jones was inducted into the NC Bar Association General Practice Hall of Fame in June, 2008.